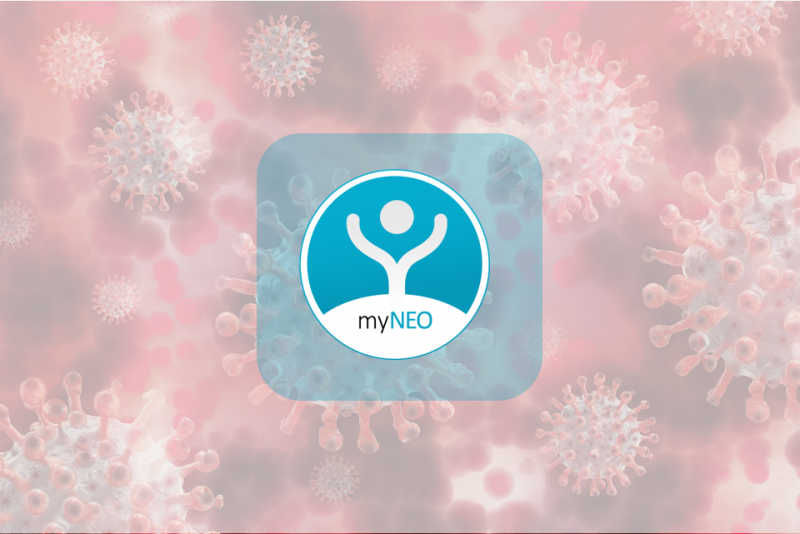 myNEO identified promising immunogenic covid-19 peptides by making smart use of its computational algorithms which resulted in pre-clinical testing of five covid-19 vaccine designs in collaboration with a European biotech company.

USE OF CANCER TECHNOLOGY
myNEO uses its technology for personalised cancer treatments to identify the major segments of the SARS-CoV-2 virus. The team normally compares DNA sequences of cancer cells with healthy normal cells of the patient. The various errors or 'mutations' that have surfaced in the tumour namely give rise to mutated proteins, which a patient's immune system can recognise.

UNIVERSAL VACCINE APPROACH
The vaccine  works differently than most. It consists of a carefully chosen cocktail of peptides (pieces of protein), identified by myNEO, that are essential for the virus, to initiate a highly targeted immune response. This approach has several advantages over using a complete protein. By specifically choosing conserved fragments that are necessary for the virus to work, the vaccine has a better effect against both SARS-CoV-2 (the virus responsible for Covid-19) and all other (future) forms of the same virus family with those same parts. By carefully choosing the virus components for the vaccine, the immune system can discover the different known forms of the virus in one vaccination. The vaccine aims to provide long-term protection to more than 80% of the global population.

In addition, a second measure is taken against mutational drift as each vaccine design is directed against 20 peptides specific to the SARS-CoV-2 species, limiting the probability that the virus would modify all 20 epitopes at once. Furthermore, the vaccine not only targets the Spike-protein but also the E-, M-, and N proteins are included. These proteins are in fact important as well for the survival of the virus which potentially increases the likelihood of a highly effective vaccine.

myNEO aims for a vaccine that activates immune surveillance cells to kill infected or malignant cells, in contrast to many other companies pursuing production of immune-related compounds (antibodies). It’s expected that this will ensure a more long-term immune response.

It is very important to evaluate thoroughly against which specific parts of the Covid-19 virus we want to vaccinate. It’s going to be the difference between a vaccine that provides long-term immunity to all known forms and relatives of Covid-19 and a vaccine that only produces results in certain select populations. Fortunately, we can learn a lot from the other coronaviruses that have flared up in recent decades. - Cedric Bogaert, CEO of myNEO.

At the end of 2020, it became apparent that the original strains of SARS-CoV-2 have been divergently mutating into different sub-strains with different characteristics, and potentially different susceptibility to the developed vaccines. Upon deeper analysis, myNEO found that the mutations that are present in the novel UK, South-African, and Brasilian SARS-CoV-2 strains, have occurred mostly in regions that were considered to be low in degree of conservation, and that were thus deemed too variable to be included in the vaccine design. This highlights the promise of the myNEO vaccine to deliver preventive protection against predicted future novel mutated strains.

Thanks to the clever peptide selection procedure based on predicted minimal mutational likelihood, and the combination of multiple peptides within each design, it is assured that the impact of mutational drift is minimal on the vaccine efficacy.

START HUMAN TRIAL LATE 2022
Early preclinical work has confirmed that these conserved antigen constructs induce significant immune responses. Further preclinical work is ongoing and the goal is to start to test the vaccine on humans in late 2022.