Collaboration between myNEO and Radboudumc: neoantigens arising from non-coding regions

In an ongoing collaboration between myNEO and the research lab led by Prof. Dr. Jack Schalken (Radboud University Medical Center) novel neoantigens are being investigated that are shared among prostate cancer patients. In this research project, non-coding regions are explored as a potential source of targets for personalised immunotherapy, as accumulating evidence is showing that many genomic regions previously thought of as non-coding actually undergo translation.

In particular, numerous micropeptides derived from small open reading frames (smORFs) within non-coding RNAs have been identified through large-scale approaches. Interestingly, the functional impact of some of these micropeptides on cancer progression has already been established, making them an intriguing set of novel therapeutic targets. In addition, tumour-specific alterations located in smORFs could give rise to non-canonical neoantigens, making them especially attractive immunotherapy targets in tumours with low mutational burden where exonic variation is limited.

In the data-analysis methodology used by myNEO, an in-house developed machine learning algorithm, smORFin, was applied to identify coding smORFs potentially generating micropeptides. smORFin was specifically trained to identify protein-coding sequences by investigating sequence- and peptide-specific properties such as Kozak similarity, hexamer score and isoelectric point. Moreover, smORFin was integrated in a neoantigen prediction pipeline, allowing for the identification of non-canonical neoantigens. 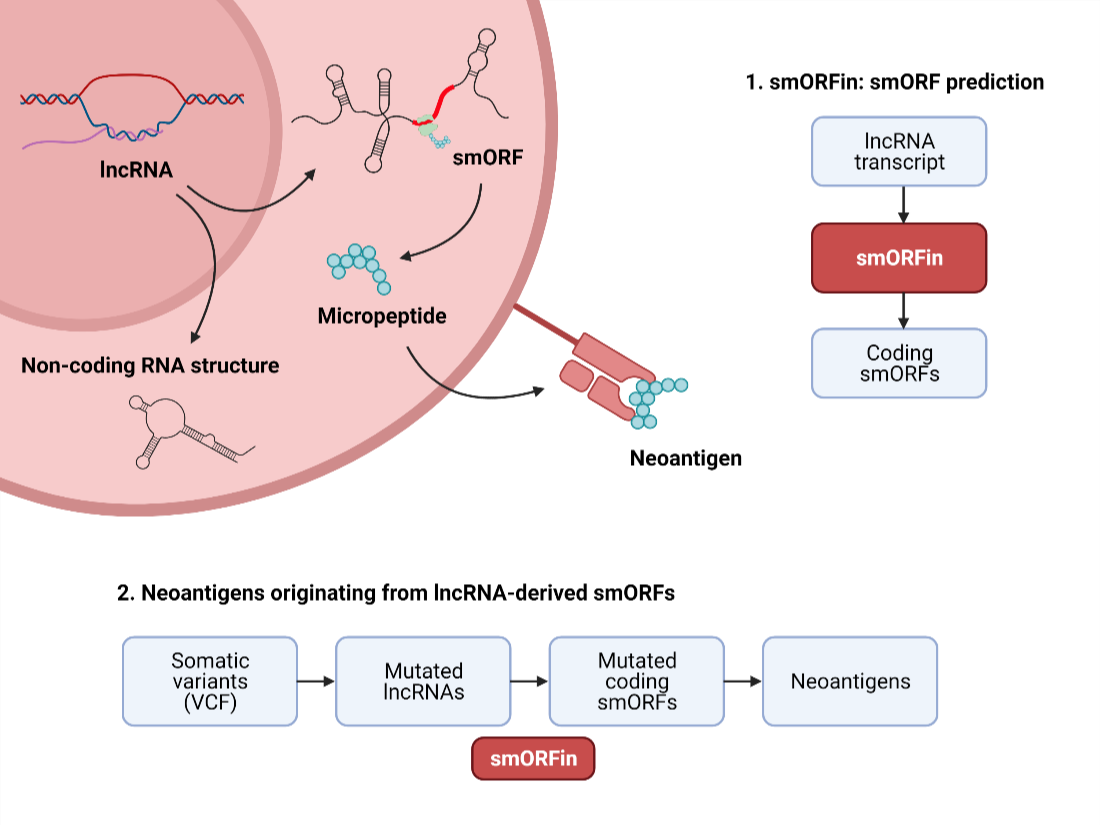 This bioinformatic approach combined with the expertise of Prof. Dr. Jack Schalken and his team has led to promising preliminary discoveries in prostate cancer that have been validated already in lab experiments. Next steps in the collaboration will be to further validate these targets in clinical samples, investigate the biological principle behind these potential targets, and evaluate their clinical use.

"The roads of Radboudumc and myNEO crossed at ‘’PCA3”. Researchers from the academic hospital Radboudumc identified PCA3 as the first prostate cancer specific lncRNA. The function of this lncRNA is largely unresolved and myNEO suggested that PCA3 might encode small peptides. The contract for a public private partnership was swiftly agreed upon and signed, and the search for smORFs was initiated. The complimentary expertise of both teams was the basis for synergy resulting in the identification of a number of candidate targets. Though the teams never met ‘’in person’’, the collaboration was immediately, pleasant, constructive, and successful. myNEO is a top partner for a project where academia and biotech reinforce one another. We look forward to a long and productive collaboration."

myNEO is due to its innovative technology continuously discovering and evaluating novel epitopes that could drive novel immunotherapies among cancer patients. More information regarding the algorithms that were used by myNEO during this project (e.g. smORFin) will be released soon once the peer reviewed paper has been published.