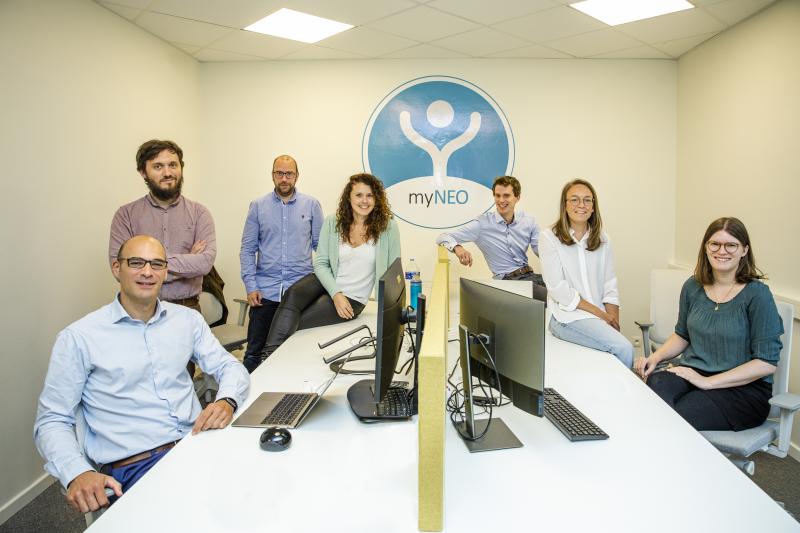 The biotech industry in Ghent is very much alive. This is also proven by myNEO a young company that develops technology for personalised cancer treatments.

Through sequencing of the entire genome, a technique that has been around for some time but only recently became applicable on a large scale, you can read the DNA of every patient. In addition, tumour cells are perfectly distinguishable from healthy specimens. Some 'errors' can be detected in the tumour cells themselves that give rise to mutated proteins. “And that's where the complexity starts. There are several hundred to thousands of errors in the tumour, but only about 30 to 40 of those 'wrong' proteins (or neoantigens) are expressed. A vaccine is only released on these ones. In addition to discovering these differences, myNEO's algorithms are responsible for predicting these neoantigens as accurately as possible, because it is only against those proteins that the immune system will react.“

The first results have been made. At the beginning of next year we will start a capital round and hope to raise 5 million euros -  CEO Cedric Bogaert.

In the meantime, various collaborations have already been concluded and the data from the first trials with human samples is coming in. “The first results are already promising. The immune system reacts well and strongly against the tumour cells. But that should not be a reason to talk about victory and draw conclusions. We look at everything step by step”.

This fall, myNEO is preparing for a capital round. “We will start at the beginning of next year and the goal is to land at 5 million euros. We have chosen not to simply resell our technology and products with a view to direct turnover. On the contrary, we are even purposefully targeting long-term partner success stories through royalties and commercial milestones. In our case, therefore, in combination with the anticipated growth, a capital injection is part of the plan for the future. After all, we want to aim for a team of 25 to 30 employees within three years so that we can spread evenly over the internal development of our product and the follow-up of partnerships.”