Multiple reports have revealed that the original strains of SARS-CoV-2 have been divergently mutating into different sub-strains with different characteristics, and potentially different susceptibility to the developed vaccines.

Most recently, in December 2020, a new coronavirus variant in the UK has been brought to attention, which has been termed VUI 202012/01 (Variant Under Investigation, year 2020, month 12, variant 01). The mutation deemed most relevant is N501Y, which is located in a region relevant in host receptor and antibody binding. Most of the coronavirus mutations that have been detected, serve as regional markers and rarely affect viral fitness or clinical outcome. However, the UK NERVTAG group of experts concluded: 'In summary, NERVTAG has moderate confidence that VUI-202012/01 demonstrates a substantial increase in transmissibility compared to other variants'.

In November 2020, Denmark decided to cull all its mink after a mutated form of the SARS-CoV-2 virus, that can spread to humans, was found on mink farms. It was reported that mutated forms of coronavirus had spread between human and mink in multiple countries. The Global Initiative on Sharing All Influenza Data (GISAID) highlighted five mutations in the Spike protein of the coronavirus genome that are putatively linked to outbreaks in mink. In general, these mutations are not expected to enhance virus infection and transmission in humans. However, as these mutations have the ability to affect immune cell and antibody recognition (especially Y453F), this type of outbreaks might have some implications in the COVID-19 epidemiology and the efficacy of the vaccines under development.

To estimate the effect of such mutational drift on vaccines under development, a study of the novel sequences was performed. myNEO announced in May 2020 that its proprietary algorithms had identified promising immunogenic epitopes on the SARS-CoV-2 virus, which resulted in the design of five COVID-19 vaccine designs currently being evaluated as candidates for clinical studies. One of the main keystones of the design procedure was based on resistance to future mutations, obtained by selecting vaccine sequences that are part of highly conserved regions (compared across SARS-CoV-2 strains, but also other coronaviruses in human & other host species). These regions are deemed to be functionally important and less likely to mutate during the future evolution of the pandemic. In addition, a second measure is taken against mutational drift as each vaccine design is directed against 20 epitopes specific to the SARS-CoV-2 species, limiting the probability that the virus would modify all 20 epitopes. myNEO took advantage of these historical datasets to provide long-term protection to more than 80% of the global population against SARS-CoV-2 and all other and future forms of the same virus family. 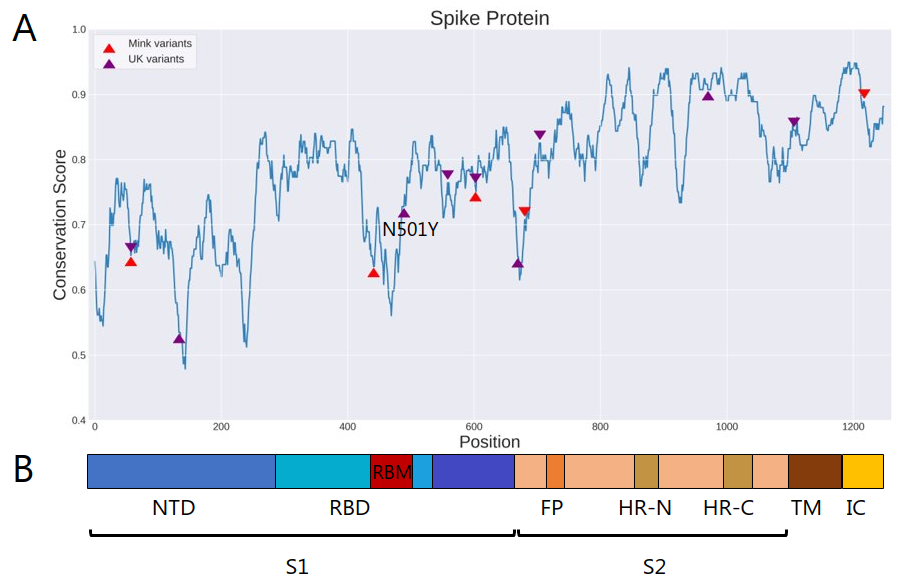 Next to the promising preclinical datasets estimating immunogenicity of the vaccine designs, the promise of the myNEO vaccine to deliver preventive protection against a predicted future novel outbreak was examined based on the novel UK SARS-CoV-2 strain. It was not expected to have a real-world testing scenario for the myNEO vaccines already this early. But indeed, upon deeper analysis it was found that the mutations that are present in the novel UK SARS-CoV-2 strain, have occurred mostly in regions that were considered to be low in degree of conservation, and that were thus deemed too variable to be included in the vaccine design in the first place.

To illustrate, the figure above shows the mutational patterns of the aforementioned 2 new strains, along the spike protein sequence and mapped onto a graph illustrating the predicted conservation. The 14 key mutations that have been observed in these novel strains, are only affecting one or two peptides included for each myNEO vaccine design. Thus, thanks to the clever peptide selection procedure based on predicted minimal mutational likelihood, and the combination of multiple peptides within each design, it is assured that the impact of mutational drift is minimal on the vaccine efficacy. As mentioned above, the N501Y mutation is of particular relevance because it is located in the receptor binding domain (RBD) of the Spike protein which indicates that the first-generation vaccines could have lower efficacy against this mutation. Indeed, most of them are designed to elicit antibodies directed against the full Spike protein that are mostly targeted to the RBD to induce a protective immune response (1). In contrast, this does not affect any of the myNEO vaccine designs because the N150Y mutation is located in a lowly conserved region of the Spike protein.

By the end of January, the first results of the preclinical tests, to assess whether the selected vaccine candidates are immunogenic, will be available. The most promising targets are expected to be tested in the clinic early after.